The POETRY of LIFE

Poet Christian Bök's The Xenotext is a poem that has been translated into DNA to be inserted into a bacterium. 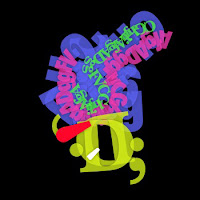 So how is The Xenotext different to what's been done before?

Firstly, it's an original work that I've written. But it's also written in such a way that, when it's translated into this gene sequence, and then implanted, it can cause the organism it's implanted in to produce a viable protein in response - a protein that is itself a completely different poem. So I'm genetically engineering a bacterium that won't just archive my own text in its DNA, but also becomes a machine for writing a poem in response.

What is the verse that you've encoded?


- from: Cryptic poetry written in a microbe's DNA, by Jamie Condliffe.

"According to Foucault,
the singularities that serve to rupture and renew normative discourse always emerge from the interstices – in other words, where nobody is looking. Almost certainly nobody was looking in the direction of Bury for the emergence of this significant project…"