15 years ago, General Motors debuted the first fully electric vehicle for lease in the United States.  The EV1 was silent, fast, and as aerodynamic as an F-16 fighter jet; but most importantly, it could run between 70 and 150 miles on a single charge. (Toyota’s Prius Plug-in Hybrid, for comparison, has an all-electric range of 13 miles.)  Between 1996 and 1999, more than 1000 EV1s were manufactured.  800 were leased out in Arizona and California, and, according to the brand manager at GM, inspired “maniacal loyalty” in their drivers.

Four years later, despite pleas from drivers, and a waiting list of interested customers, GM declared the electric-car program a money loser, and ordered the car’s destruction.  Existing EV1s were taken from their drivers, transported to the desert (in some cases, under police protection), and crushed. (Today, a few can be found in museums, but they’ve been disabled so as to never drive again.) 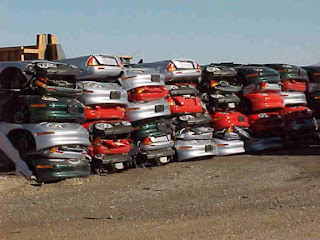