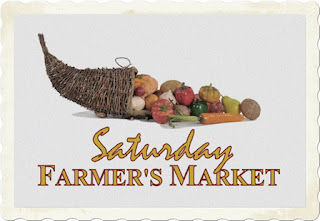 It has been a rough week so I haven't accomplished much. I'm attempting to get the herb side of the yard under control, but it's going to take a while. Hopefully I'll have an update with pictures next week. 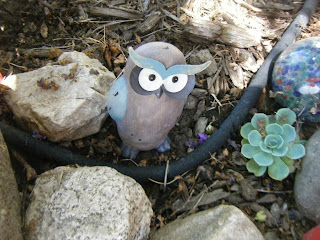 I got another 'big bag o daffodils' to plant this year. I planted one last year and this spring was glorious. One more should be enough to fill in all the places that still need sunshine come next spring.

I'm really feeling the Fall. This is my low time of the year, and I always seem to struggle most as leaves are falling and the days grow short. Granted, it's much better here in CA than it was in PA, with much more sun and much less rain - not nearly as grey - but I still feel it in my bones.


Behind a Wall
- Amy Lowell

I own a solace shut within my heart,
A garden full of many a quaint delight
And warm with drowsy, poppied sunshine; bright,
Flaming with lilies out of whose cups dart
Shining things
With powdered wings.
Here terrace sinks to terrace, arbors close
The ends of dreaming paths; a wanton wind
Jostles the half-ripe pears, and then, unkind,
Tumbles a-slumber in a pillar rose,
With content
Grown indolent.
By night my garden is o'erhung with gems
Fixed in an onyx setting. Fireflies
Flicker their lanterns in my dazzled eyes.
In serried rows I guess the straight, stiff stems
Of hollyhocks
Against the rocks.
So far and still it is that, listening,
I hear the flowers talking in the dawn;
And where a sunken basin cuts the lawn,
Cinctured with iris, pale and glistening,
The sudden swish
Of a waking fish.

from: A Dome of Many-Coloured Glass. Copyright 2010. 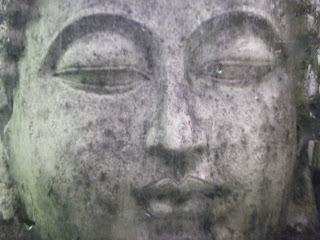 
By now, I think it's obvious to even the most casual observer that, though I'm far from being an expert, I love gardening.

Occasionally, while complimenting my latest efforts, my neighbors let slip that they just can't wait to see the finished garden.

How silly! A finished garden!

But even California has a winter, and it is coming on fast. Yes, there is planning and plotting, seed starting and propagation, but it is just not the same. On the plus side, I don't have to worry about the trimmer, the lawn mower, weeds, & bugs. But I so miss playing in the dirt.

For many years my husband had a 55 gallon fresh water aquarium. He favored Oscars and a friend had given him the biggest silver dollar we'd ever seen. But eventually, his interests moved in another direction, and were left with a large tank that took up quite a bit of precious real estate in our small house.

What to do? Give it away? Sell it? Use it for something else?

Aha! Use it for something else! 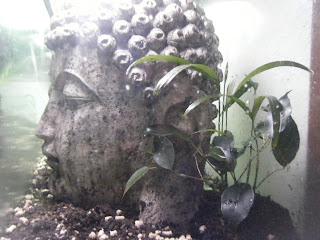 An idea was born!

Why not turn it into a terrarium? At 55 gallons, it makes for jumping in with both feet, but it's still smaller than a typical city lot (even after you subtract for the house and garage). I figure I could cultivate and tend it over the winter and maybe it would help with the winter blues.

(Unfortunately, I didn't think to take pictures at the beginning of the project.)


I cleaned and prepared and researched, until I had a plan. I've been putting together the bones of the plan and collecting materials I think I will need. I already started with the planting, and that's where I hit on my first snag.

My inspiration was beautiful pictures I'd seen of Thai rain forests and ruins around Buddhist temples. I found the perfect Buddha head at Ross. Gravel, dirt, charcoal, small plants and ground cover came together well. But in all my reading I had never come across he word quarantine - or the necessity thereof. 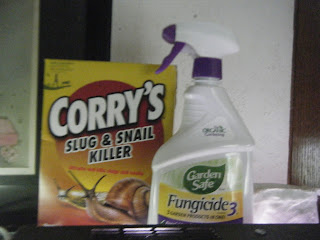 My ground covers started dying and there was nothing I could do to stop it. Then came the bigger plants. Gnats, spider mites, slugs and snails: all were flourishing in my terrarium.

I tried all the natural, 'unchemical' remedies first, but to no avail. So I finally bit the bullet and bought poison, one for the slugs and snails, and one for the rest - the nuclear option. Here I am using poisons in my house that I would never use in my garden.

After the poison the soil ended up covered with a white hairlike growth all over it. (Again, no picture. Sorry.) I had to remove most of the soil and replace it. 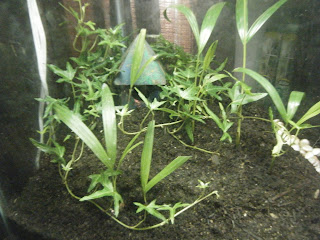 My husband read (on the internet, of course) to put a chunk of dry ice inside and seal it off. It kills the pests and is good for the plants. (It's also ridiculously cheap as well.) Guess what. It worked! Everything is gone.

Now my biggest challenge is finding plants that will flourish in a closed (high humidity) terrarium. 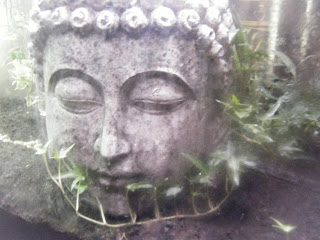 In the meantime, I have one Schefflera, three small English Ivies, one intrepid Peace Lily, and some tiny Areca Palms. (A 40 foot tree is a good terrarium choice, right?)

So, this winter I have plans to build a suspension bridge, bring in some livestock (pigs & chickens), some people to tend the animals, and of course a rainforest needs many more plants. This is only a beginning.

I've had some unexpected drawbacks, and have a great deal to learn. In the terrarium it's as if I am a new gardener starting from scratch. But it's been fun so far. 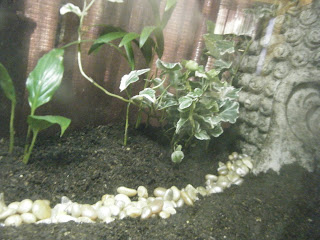 One of the unexpected things I learned was that my terrarium, with its self contained ecosystem, has a dew cycle. When I get up in the morning, the glass is so wet you can barely see through it. I turn on the lights and as the time passes, it dries out and the water disappears, just like outside in the garden. 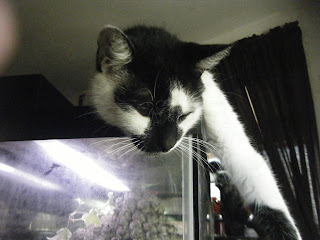 This little guy is 'Benicio del Gatto.' Benny for short. He loves sleeping on top of the terrarium because the light keeps him warm and he can watch the birds at the feeders just outside the window.