I have been trying to get caught up with the garden work . . . but I don't think that is going to happen any time soon.

I gave the Bananas two years, but even with our long growing season there isn't enough time before the frost to get any fruit, so I took them out this week.

It turns out that the beautiful flowering grass I planted to help shade the west side of the house is invasive in California, so it had to go too.

The new puppy shredded my new irrigation on the fruit trees in the back yard so I pulled it up and am making plans for its replacement (made out of PVC to make it puppy proof).

He likes to chew on my trees too, so we put in posts around the beds and will be installing chicken wire to protect them (and the irrigation). We wrapped the most vulnerable with old wire fencing that we had, until we can get the chicken wire.

We lost three fruit trees last year because the irrigation in the rental house next door malfunctioned, drowning them, and it took forever to get someone to fix it. Several years ago I lost all the plants in my mailbox bed because of their irrigation, and it nearly drowned our Nave orange tree when it was smaller. One of the trees we lost was our Santa Rosa Plum, our first and favorite. Lowes had some so we picked up another and planted it out back with the Lemon, Pluot, and two Apple trees.

I still need to build another bed for fruit trees so that I can replace the rest of the trees we lost, but put them out back where they will be safe from the neighbor's irrigation. 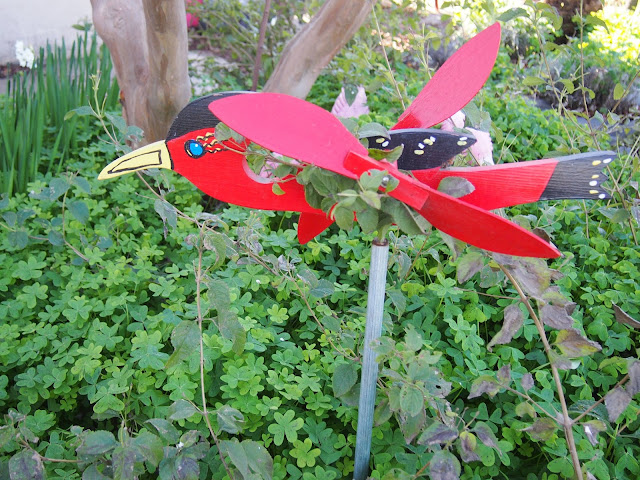 Last year at the local Farmer's Market there was a couple who made these wonderful whirligigs. I had enough to purchase this Road Runner and hoped to get Wile E. Coyote this year, but they weren't there this year. Oh well. 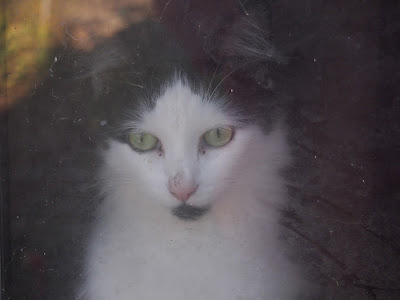 This is the little Angel who watches over me the entire time I am in the front garden.

Remember Joon-bug, refered to affectionately as "Joon-bug Von Weenie Cat" by my husband?

She talks to me whenever I look her way, imparting her priceless garden wisdom. 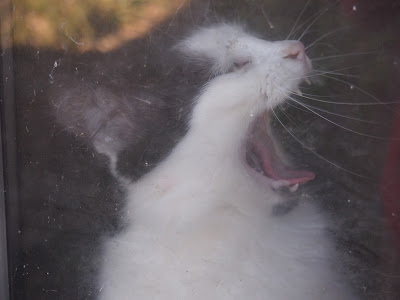 "Mom!
The dog's looking at me again!"


The Naming Of Cats

- T.S. Elliot
The Naming of Cats is a difficult matter,
It isn't just one of your holiday games;
You may think at first I'm as mad as a hatter
When I tell you, a cat must have THREE DIFFERENT NAMES.
First of all, there's the name that the family use daily,
Such as Peter, Augustus, Alonzo or James,
Such as Victor or Jonathan, George or Bill Bailey—
All of them sensible everyday names.
There are fancier names if you think they sound sweeter,
Some for the gentlemen, some for the dames:
Such as Plato, Admetus, Electra, Demeter—
But all of them sensible everyday names.
But I tell you, a cat needs a name that's particular,
A name that's peculiar, and more dignified,
Else how can he keep up his tail perpendicular,
Or spread out his whiskers, or cherish his pride?
Of names of this kind, I can give you a quorum,
Such as Munkustrap, Quaxo, or Coricopat,
Such as Bombalurina, or else Jellylorum-
Names that never belong to more than one cat.
But above and beyond there's still one name left over,
And that is the name that you never will guess;
The name that no human research can discover—
But THE CAT HIMSELF KNOWS, and will never confess.
When you notice a cat in profound meditation,
The reason, I tell you, is always the same:
His mind is engaged in a rapt contemplation
Of the thought, of the thought, of the thought of his name:
His ineffable effable
Effanineffable
Deep and inscrutable singular Name.