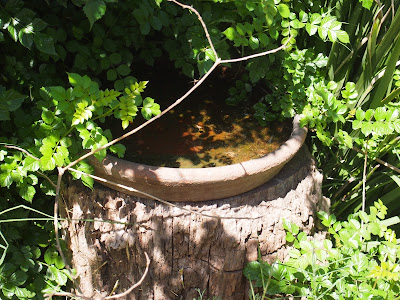 My little make shift Bird Bath has settled in with the happy Cape Honeysuckle filling in all around it.

It actually looks like I will have to move the bird bath out a bit by the end of the year.

The choice is to move the bird bath out or cut the Cape Honeysuckle back, and I don't want to cut. 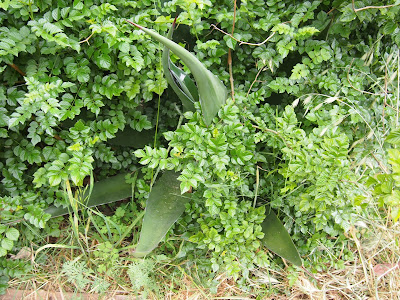 After seeing how happy this plant is this year, I have decided to let the bed go as wild as it wants.

I will, however, have to move both the Fortnight Lily (not pictured) and the Agave further from the exuberant Cape Honeysuckle.

The Agave, as you can see, is incognito, but quite healthy and growing well.

Four Birds
- Howard Moss
“Wake to the sun,” the rooster croaked,
First bird of the day. The world, light-flecked,
Chiselled its lineaments into form.
Where was all that fine light coming from?

“Trance at the wonder,” the second sang.
Whose five dry notes urged the ongoing
Afternoon on. “Why wake and stir?”
It asked. And asked. There was no answer.

“Live through the muddle.” That from the next one.
Not very helpful. It looked like rain,
Or fog in the offing. Twilight. Then
It sang again from an oak or pine.

Silence. How I waited for the fourth!
Time was a negative dipped into its bath,
The dark a fixative that slowly made
For every windowpane its window shade.

No messages arrived. No music bared
The soul for its penitence. Up the stairs
No hint of a footfall. The night passed.
“Croak by your hand,” said the crow at last.