I JUST HAD MY FIRST CUP OF REAL TEA IN A LONG TIME. 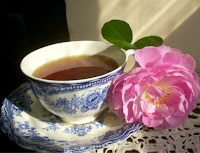 Don't get me wrong. I drink tea like most people drink coffee. My pot is even programmed to have it ready for me when I crawl out of bed in the morning.

But anyone who truly loves tea knows there is a tremendous difference between the basic, serviceable grocery store offering and the fresh, loose, black gold found in tea shops.

I ordered several varieties from English Tea Store. Their link is found at the side bar under Comforts Let's Talk Tea.

I had to pull out all the requisite tea making paraphernalia that had been languishing in the cupboard. It took more time and effort than my automatic teapot. But it was well worth it when I curled up in my leather reading chair with an heirloom china cup full of strong, smooth brew and a good book.

I was transported to another world.

I was lucky enough to have some nice quite time to read and, trust me, that doesn't happen very often around here.

Now, I have to admit to a guilty pleasure - Castle. I enjoyed Nathan Fillion in Firefly and Serenity, so when he showed up with a new show I had to watch it. And I love it. His character is a mystery writer and he has published two novels that he "wrote." I just read them both.

Not too bad, and fun. I heard the voices and inflections of the actors as I read them. In this case it was a good thing. And when you have a tie in with characters that you enjoy it heightens the pleasure.

The big question is who actually wrote the books. Is the ghost writer one (or more) of the show's writers? Is it one of the best selling novelists who have graced the cameo list as Castle's poker buddys?