from: Thirteen Ways of Looking: Poems About Birds 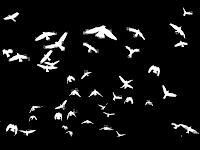 Hope is the thing with feathers
That perches in the soul,
And sings the tune without the words,
And never stops at all,

And sweetest in the gale is heard;
And sore must be the storm
That could abash the little bird
That kept so many warm.

–from "Hope is the thing with feathers" by Emily Dickinson

–from "Sympathy" by Paul Laurence Dunbar

I will never give up longing.
I will let my hair stay long.
The rain proclaims these trees,
the trees tell of the sun.
Let birds, let birds.
Let leaf be passion.
Let jaw, let teeth, let tongue be
between us. Let joy.

–from "Let Birds" by Linda Gregg

My mother would be a falconress,
And I, her gay falcon treading her wrist,
would fly to bring back
from the blue of the sky to her, bleeding, a prize,
where I dream in my little hood with many bells
jangling when I'd turn my head.

–from "My Mother Would Be a Falconress" by Robert Duncan

But the Raven, sitting lonely on the placid bust, spoke only
That one word, as if his soul in that one word he did outpour.
Nothing further then he uttered--not a feather then he fluttered--
Till I scarcely more than muttered "Other friends have flown before--
On the morrow he will leave me, as my hopes have flown before."
Then the bird said "Nevermore."

–from "The Raven" by Edgar Allan Poe

Last night I dreamed of chickens,
there were chickens everywhere,
they were standing on my stomach,
they were nesting in my hair,
they were pecking at my pillow,
they were hopping on my head,
they were ruffling up their feathers
as they raced about my bed.

–from "Last Night I Dreamed of Chickens" by Jack Prelutsky

Alas a doubt in case of more go to say what it is cress. What is it. Mean. Why. Potato. Loaves.

–from Tender Buttons by Gertrude Stein.