Over 200 are dead after over a hundred separate tornadoes left a trail of destruction across five states in the American South. The nation appears headed for a record number of tornadoes this year. -- Lane Turner. 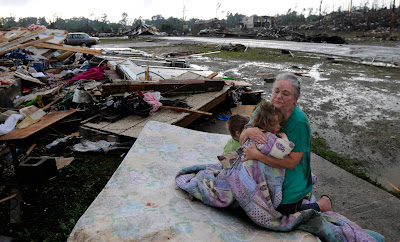 Faye Hyde sits on a mattress in what was her yard as she comforts her granddaughter Sierra Goldsmith, 2, in Concord, Ala. April 27, after their home was destroyed.

The Big Picture documents the destruction down south.

TO DONATE: I have provided links here for

THE RED CROSS,
and
DOCTORS WITHOUT BORDERS.

The permanent links for both are in my sidebar.