SOME 'Sacred cows' NEED TO BE SACRIFICED

- Laura Helmuth gives us a few in:
Top Ten Myths About the Brain,
at Smithsonian.com.
THIS one is my pet peeve: 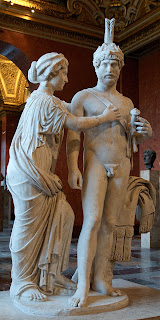 Some of the sloppiest, shoddiest, most biased, least reproducible, worst designed and most overinterpreted research in the history of science purports to provide biological explanations for differences between men and women. ... Though there are some differences (minor and uncorrelated with any particular ability) between male and female brains, the main problem with looking for correlations with behavior is that sex differences in cognition are massively exaggerated.

Women are thought to outperform men on tests of empathy. They do—unless test subjects are told that men are particularly good at the test, in which case men perform as well as or better than women. The same pattern holds in reverse for tests of spatial reasoning. Whenever stereotypes are brought to mind, even by something as simple as asking test subjects to check a box next to their gender, sex differences are exaggerated.

Certain sex differences are enormously important to us when we’re looking for a mate, but when it comes to most of what our brains do most of the time ... men and women have almost entirely overlapping and fully Earth-bound abilities.