The Animals
By Josephine Jacobsen


At night, alone, the animals came and shone.
The darkness whirled but silent shone the animals:
The lion the man the calf the eagle saying
Sanctus which was and is and is to come.


The sleeper watched the people at the waterless wilderness’ edge;
The wilderness was made of granite, of thorn, of death,
It was the goat which lightened the people praying.
The goat went out with sin on its sunken head. 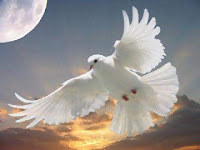 High in the frozen tree the sparrow sat. At three o’clock
The luminous thunder of its fall fractured the earth.
The somber serpent looped its coils to write
In scales the slow snake-music of the red ripe globe.


To the sleeper, alone, the animals came and shone,
The darkness whirled but silent shone the animals.
Just before dawn the dove flew out of the dark
Flying with green in her beak; the dove also had come.