What Does a Poet Laureate Do? Rita Dove. 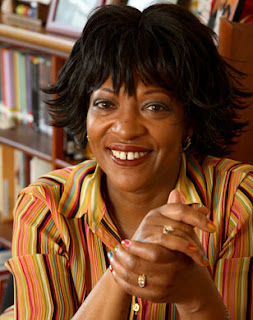 
"The first thing that could be done is to bring poetry into our children's lives at an early age --- without pressure."


Everyone who worries about understanding poetry would benefit from this:


I had a ninth grade English teacher, Mr. Hicks, who put us in groups and gave us impossible poems to interpret. When I say "impossible," I mean poems which had Greek in them -- a little bit of Greek and -- languages we couldn't even -- we couldn't even read the alphabet. "Just tell me what it means. Tell me what you think it means."

And after a couple of class periods when we decided this is so impossible we might as well just make a wild guess, it turned out our guesses weren't so wild after all. So he taught us to trust what your gut reaction was to something. Even if you didn't understand every word, to work out the context.


Ms Dove has concentrated on spreading the word about poetry and increasing public awareness of the benefits of literature. She brought together writers to explore the African diaspora through the eyes of its artists, and also championed children’s poetry and jazz with poetry events.


She took Washington kids into the Library of Congress to read their poems and to be recorded for the Archives.

She brought Crow Indian children to Washington where they forced their Congressmen to listen to them tell what poetry meant to them.

She had an evening of poetry and jazz to join those two audiences.


She also, like others who have sought to open up the Literary Canon, stirred up controversy when she edited The Penguin Anthology of 20th Century American Poetry. She was accused of valuing inclusion over quality.


Dove defended her choices and omissions vigorously and eloquently in The New York Review of Books.


Her most famous work to date is Thomas and Beulah, a collection of poems loosely based on the lives of her maternal grandparents, for which she received the Pulitzer Prize in 1987.

Ms Dove and her husband Fred Viebahn, are avid ballroom dancers, and have participated in a number of showcase performances. She has even published a book of poetry about dancing entitled American Smooth.

Take a moment and enjoy a bit of dancing and poetry.