Last month Lu posted some interesting 'just in case you need one' prompts for this challenge but I had already written my post for the month.

One of them was actually a subject close to my heart, and I really wanted to give it a try, so I'm going to tackle it this month:


How do you think we can teach kids to love poetry?

First, A little disclosure. I refer to myself, euphemistically, as an "underemployed teacher" (English Language Arts, Special Education). My background also includes many years of working as a Literacy Volunteer. I currently tutor at risk kids in local school districts as an off shoot of No Child Left Behind.

It is a challenge that often leaves me feeling elated and defeated simultaneously. As you might imagine, kids who are struggling generally don't want to read at all - forget poetry! But I have found that what matters is 1). The poems you choose and 2). your attitude toward their attempts.

Oh. And don't think they won't know if YOU don't like poetry.

Regardless of age, I like to start with Shel Silverstein. Who can't relate to his poetry? And relating is the name of the game.

My copy of Where the Sidewalk Ends is worn and a bit tattered around the edges. I've lost count of the number of young hands that have held that book; the number of intense and struggling students who have found laughter - despite themselves. If a book could have emotions, this one would be happy and proud to have helped so many striving minds.

Here is one of my favorites (though that changes often): 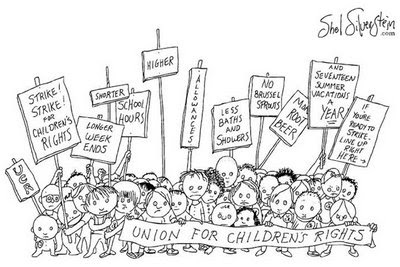 If the World Was Crazy
by Shel Silverstein

from: Where the Sidewalk Ends. Copyright 1974.